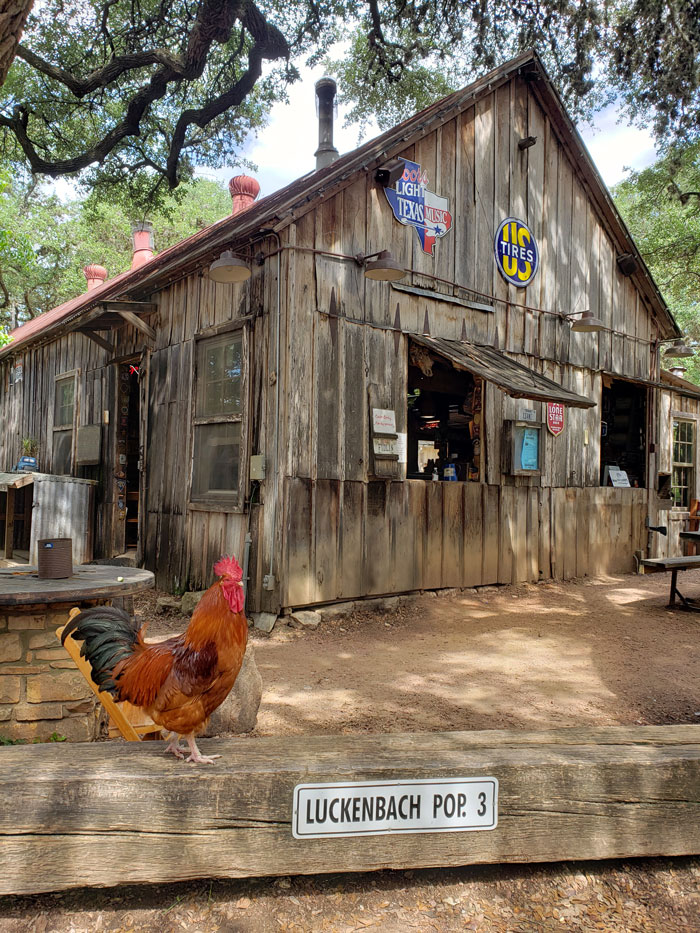 We took a side trip to Luckenbach, Texas on our way to Fredericksburg. It was the coolest place!

Waylon and Willie cannot take credit for Luckenbach’s fame. Surprisingly, Luckenbach was not made famous by the country song. The little town, only nine acres in total, has been pulling in crowds for years and years. While enjoying the ambiance, we got a history lesson.

Thirteen miles from Fredericksburg, German farmers founded a community trading post. The town was initially named South Grape Creek. This trading post has a reputation as one of the few that never broke a treaty with the American Indians.

Before long the Luckenbach family opened the general store, saloon, and eventually the dance hall. After pretty much taking over the town, the name was changed.

Due to the dwindling population, the Post Office closed in 1971 and the zip code retired. At that time, John Russell “Hondo” Crouch bought the entire town for $30,000. His plan was to make it a travel destination and he succeeded. His motto was, “Everybody’s Somebody in Luckenbach.” Hondo organized festivals including chili , and Luckenbach’s own, well-attended World’s Fair. Although Hondo died just five years later, the town still lives on today.

Luckenbach has the look of a ghost town. For instance, the Post Office was closed, but the building remains for tourists. In to the general store, the saloon and dance hall are operational every day of the week. A visit doesn’t take long, but you can stay all day and be entertained.

The mainstay of modern-day Luckenbach is the music. Live entertainment is available seven days a week, usually starting at 1:00 p.m. Of course, for the most part, the genre is country. A great majority of the entertainment is free but check their website in case you hit one of those odd, ticketed performances. Often ticketed events are for some worthy cause. 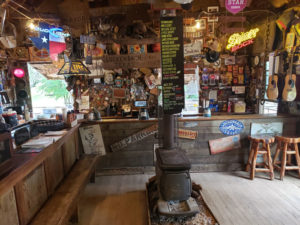 The general store was full of souvenirs. Of course, we had to indulge. I got a t-shirt and Bobby picked up a hat. We also brought home a Luckenbach General Store ornament to hang in our RV. How could we pass up a chance to show off our visit to world famous Luckenbach, Texas?

The coolest part of the town for me was the friendly atmosphere. Everybody, staff and visitors alike, were sitting around on benches talking to strangers as if they were long lost friends. The morning we were there it was very peaceful and quiet. But we were warned that the afternoons and evenings are filled with crowds and country music. A weekend day averages 1,300 people, with more on holidays and special events.

Waylon and Willie didn’t make it to Luckenbach until 1997, 20 years after their song was released. Little did they know that Luckenbach really didn’t need them. But country music wouldn’t be the same without them. 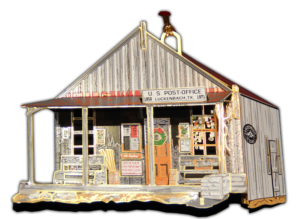 In closing, I couldn’t resist sharing a picture of the Luckenbach ornament we picked up.

Yes, Luckenbach is pet-friendly but be cautious. Chickens and roosters are loose all over the property. You don’t want to be known as the one who took out Luckenbach’s poultry population with your Schnauzer.

Obviously we’re in Texas right now. My next post will cover our trip into Fredericksburg. Check out previous posts and be sure to share your journey on RVLifestylers.com.