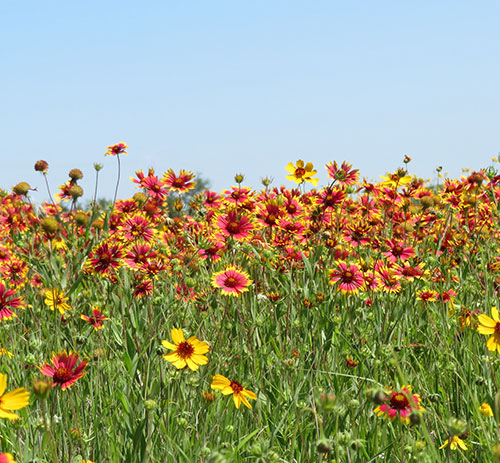 In my maturity, I’ve learned to see beauty where I never had before. Our travels have opened my eyes to recognize the unique beauty of each place we’ve been blessed to visit and stay. Arizona and Colorado have such varied terrains within their borders. Minnesota sports a lake on every corner, the beautiful trees and the abundance of majestic Bald Eagles. In it was the migratory birds, thousands of them. They were all different sizes, shapes, and colors. At our current location in Texas, it’s the wildflowers. So we took a Bandera, Texas road trip to find the flowers.

Deep in the Heart of Texas

I’ve visited Texas many times, but I never noticed the vast colors that blanket so much of the Lone Star State in springtime.

We spent the past two weekends exploring the Hill Country northwest of San Antonio. Since we fancy ourselves amateur photographers and went in search of photo-worthy fields. We found the flowers and so much more.

Bandera, Texas: The Cowboy Capital of the World

Two weekends ago we headed for Bandera, the Cowboy Capital of the World. The title dates back to the last of the historic cattle drives of the 1800s which took place there. Many National Rodeo Champions still call Bandera home and a bronze statue, dedicated to the Cowboys, inhabits the courthouse lawn.

On the way to Bandera, in the northwest corner of San Antonio, we found Hacienda Vallarta Mexican Buffet. Heading to a chosen breakfast restaurant, we were both so hungry that the buffet sounded like a better option, and it was. Although we had missed breakfast by just a few minutes, we were sold when we checked out the offerings. Not only did they provide traditional Mexican food, but they also offered American favorites, a salad bar and a soup bar, and plenty of vegetarian options for yours truly. It was quite a find and we’ll go back before we leave San Antonio.

The ride to Bandera down the 16 didn’t produce the wildflowers we were seeking, but the scenery and the town were worth the drive. Bandera is a quaint little town that offers shops, restaurants, and Cowboys on Main every weekend. We had to stop to talk to a couple of charming old ranchers on the side of the road. One had a wagon with antiques and the other brought his friend Redneck, an old, longhorn steer, to hang out for the day.

The Cowboy and His BFF, Redneck 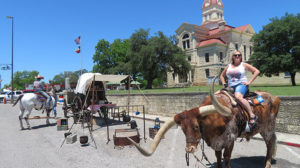 The cowboy shared that he and several other ranchers in the area bring their unique personalities to Main Street on a rotating basis. On his day he offers pictures on Redneck for tips. Redneck was very friendly, sweet and gentle. I must admit, even though I’m an animal person, it was slightly scary to climb in that saddle. I rode my first horse at six-years-old and knew that this was no pony. Knowing I was mounting an amazingly strong animal, I was not silly enough to believe that anyone could contain him if he decided to make a run for it. Those horns were an added danger, but I threw caution to the wind and climbed up for a picture. We blessed the cowboy for his time and proceeded to check out the town.

There were so many vintage shops, and museums that we were kind of sorry we brought Spotty the dog, for the ride. We didn’t spend much time in town so I can’t say how dog-friendly Bandera was, but America is usually very accommodating. Our plan is to go back and enjoy the area another time and take part in some outdoor activities like horseback riding.

To Utopia and Beyond

Before heading back to our rig in San Antonio we continued west on the 470 and did find a greater variety of open spaces and flowers. We also happened upon a herd of longhorns and stopped to snap a few pictures. From there we took a left and headed south on the 187 through Utopia. 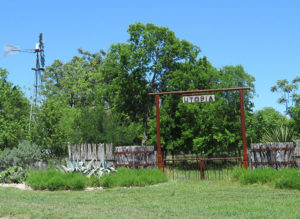 Utopia is a very quiet, little town with a population of fewer than 300 people. There wasn’t much to do there, but both entrances to town were decorated with an iron, ranch gate and spectacular, desert landscaping. All the Agave plants were huge, and the Prickly Pear Cacti were in full bloom. The multitude of Cactus Flowers just awesome.

Thinking we had plenty of pictures, headed south on the 187 again toward home. That’s when we came upon The Laurel Tree Restaurant. A gourmet restaurant on an amazing piece of property on the south end of Utopia. We didn’t go in to eat this but had to stop and see the spectacular grounds. There were fields of color just inside the gate to the right. Ahead and to the left were the most amazing, enormous, old trees. One gave shade to a peaceful bench for taking in the breeze and the colors. The other sported a bistro table with another field of flowers beyond. 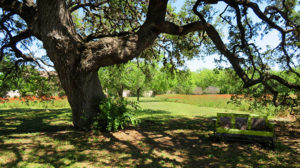 After doing some research when we got home, I found out that the restaurant is only open on Saturdays by reservation. They also have a B&B in a tree house that I’ve added to my bucket list. The Laurel grounds were the cherry on the sundae, and we headed home. I don’t think we snapped another picture after The Laurel Tree. It was a perfect ending to our Saturday ride.

In my next I’ll cover Fredericksburg, last weekend’s trip. We also stopped in Luckenbach looking for Waylon, Willie, and the boys. No country stars were seen, but Luckenbach is a “must stop” for anyone in the area.